We can create the programme in computer programming languages that control the hardware and behaviour of the machine.

How many types of computer programming?

There are two types of computer programming

What is Low-Level Computer Programming Language?

There are two categories in Low-Level computer programming languages that computers can understand easily but it is difficult for a human to understand.

What is Machine Language?

Machine Language understands 0 and 1, that’s why it directly executes in the CPU. And the computer does not use any translator or compiler to run this programme.

It is not portable as we can assume that a program in a machine language can only run on the machine for which it is designed.

What is Assembly Language?

Assembly Language is the advanced update of the machine language where you can type instructions in Mnemonic codes.

So code writing is easier than machine language because you don’t need to type 0 and 1.

To add the specific variables in assembly language you can use ADD command.

What is High-Level Computer Programming Language?

The examples of high-level languages are;

How to Become a Computer Programmer?

To become a computer programmer in any computer language, you need to know and learn the following steps.

These are the necessary fundamental steps to become an expert Computer programmer.

What is an Algorithm?

The algorithm is a finite list of imaginary instructions and structures for creating any computer programme.

You write the main points and programming headings about the programme you are going to create.

You observe the task and make the finite list of instructions for completing this task.

For example, you need to prepare the tea, then the step by step procedure in order to perform the task is an algorithm.

In computer science to making any computer programme you take steps in order.

What are the Flowcharting Shapes?

The flow of  the Flowchart

How to make a flowchart of counting from 1 to 10? 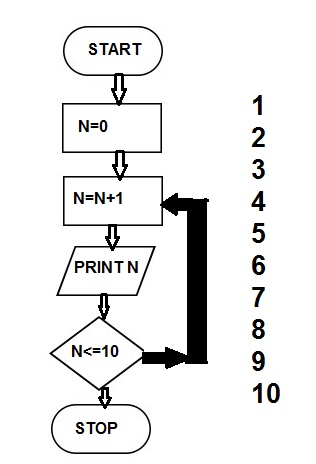