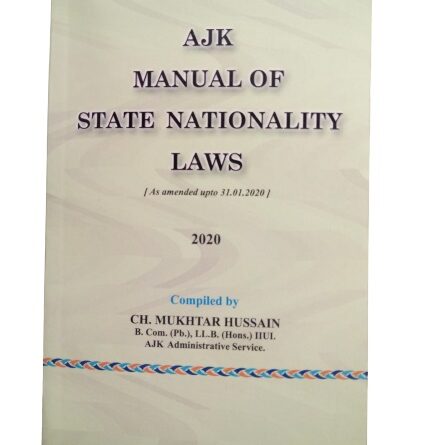 Review of the Manual

Maharaja Hari Singh, the then ruler of the Muslim majority princely State of Jammu and Kashmir, promulgated in 1927, the first law on the State-Nationality. The term “State Subject”, was defined  vide a notification issued on the 20th day of April 1927. Status of the State-Nationality was further strengthened, under a Notification issued on 27th of June, 1932, which conferred on subjects of the State the continuance of nationality in the territories beyond the State of Jammu and Kashmir, till their two descending generations.

In 1980, Azad Jammu & Kashmir Council enacted the law, namely the State Subjects Act, 1980, to regulate the practice and procedure for grant of State Subject Certificates, deprivation of the state-nationality and grant of certificate of domicile. Several instructions were issued by the Azad Government of the State of  Jammu and Kashmir, from time to time, to regulate the procedure for grant of the State Subject Certificates, grant of Ijazat-nama for purchase of land for residential purposes within the liberated territories and also to grant the certificate of domicile. Most of such orders or instructions are vernacular which have been included for the general convenience of the reference.

This Manual is divided into three parts; of those first contains statutory laws, orders and vernacular instructions relating to the State Nationality and grant of State Subject Certificates and Certificates of Domicile. The second part relates to the eligibility, terms and conditions and procedure for grant of Ijazat-nama i.e. permission to acquire land within the State territories, followed by the acquisition of State-nationality. The third part of the Manual consists of important and relevant judicial decisions and rulings of the Superior Courts of Azad Jammu and Kashmir as well as of Pakistan, for ready reference; which enunciated beautiful principles of law interpreting the basic provisions of the law on the State-nationality. Pakistan Citizenship Act has been made part of this Manual which conferred nationality of Pakistan on the State Subjects under its provisions contained in Section 8(2) and Section 14-B. The abrogated, “State Subject Certificate Cancellation Act, 1971” has also been added to the Manual for convenience of the reference. To elaborate the practice prevailed prior to proper legislation relating to the issuance of State Subject Certificates by Tehsildars, a superseded Council Order No. 512 of 1952 is included in the Manual, as appendix-VI.

This Manual is a comprehensive code on the Nationality laws which can provide answers to complex questions on State Nationality. The Manual also has old documents on definitions of State subject, which was basis of Article 35-A of the Indian Constitution which has now been made redundant and inoperative since 5th August 2019 by India.

149 paged Manual is bound by laminated card cover and printed on fine paper. It has been compiled by a senior bureaucrat of Azad Government of the State of Jammu and Kashmir who enjoys a long experience of 27 years State service dealing with sensitive and complex issues of public importance. Mr Ch. Mukhtar Hussain is well-renowned personality in AJK for compiling, translation and drafting statutes.

Ch. Mukhtar Hussain, an officer of AJK Administrative Service, is descendant of a family belonging to Rachyal clan settled in the surroundings of the inundated former township of Mirpur in the State of Jammu and Kashmir; who accepted, first of all among the whole affected population, their displacement in the early sixties for the prosperity of brethren people of Pakistan; by agreeing their resettlement in far enough village in the then district of Sargodha in Central Punjab, on account of successful completion of Mangla Dam, a national project of irrigation and power generation.

He was born in 1967 at Chak No. 53 / MB (Jauhrabad), of the said district of Sargodha. He received his early education in local educational institutions of the Area. He graduated in Commerce in 1986-87 from University of the Punjab, being a student of Government College of Commerce, Sargodha; and completed his degree of LL.B. Hons. in 1991 from International Islamic University, Islamabad.

He translated AJK Interim Constitution into Urdu which was published first in 1994. He compiled several books on laws of Azad Jammu and Kashmir including voluminous book namely, “Land Laws of AJK” published by Board of Revenue, Muzaffarabad. He also translated AJK Prevention of Cruelty to Animals Act, 2014, into Urdu, which was, later on, published and distributed as an awareness campaign on rights of animals. We wish his efforts may be more beneficial to the people as well as to the State.

How to order the book?

You can also contact me to add your book review in the book review section on my website.