Unity is strength Modern Story is a modern age story where a woodcutter tries to give the lesson of his sons to live in unity.

Once upon a time, there lived a modern woodcutter. 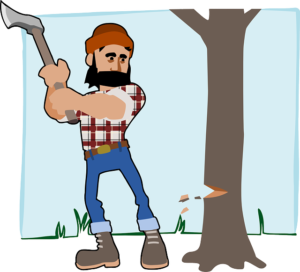 He has four sons, and they use to fight each other every time.

How the woodcutter gave the lesson of unity to his sons?

Decided to give his sons the lesson of unity with the thread, like old stories. But!!!!

And ordered his sons to bring the thread.

The sons were very surprised, and And they were looking at each other questioningly۔

Why were the sons so surprised?

One son why the father is asking us to bring the thread.

2nd maybe he wants to teach us how to sew clothes.

Does he want us to be tailors?

And brought thread and gave it to their father.

He cut the threat in equally four pieces and gave them to each son and ask them to cut it with their hands.

They all did it easily in just one second.

And twisted the thread into a rope. And gave it to his younger son and ordered him to cut this rope in two pieces, without the help of his brothers.

He was an expert in judo and karate.  And took his breath inside,  held the rope.

One foot forward. Made a loud voice of “Chaaaaa”,  and cut the rope cut in two pieces.

How did the young son cut the wood into two pieces?

The father held his head and sat down, and said their sons to go.

His wife asked him,  why you are looking so worried.

He pointed to his sons who were fighting that time too.

His wife took a deep breath.

And said to his husband, why did not, you try to give the lesson of unity to the sons, as the old woodcutter gave.

O! That’s Really Good! the woodcutter was very happy and in hope, that now I will give the lesson of unity to my sons.

What did the woodcutter’s wife say to his husband?

Then he called again his sons and order them to bring four, woods from the forest like old woodcutter did to give his sons unity lessons.

Now sons were very much surprised and asking each other, what happened to our father, before thread and now wood.

Is he want to make us woodcutters.

They decided to bring woods from the woodshop because they thought it would be difficult to find the forest in the city.

So they brought four pieces of wood and gave them to their father.

The father gave each son a piece of wood.

There was a loud sound like (Chatkhaakh) from each son side.

Woodcutter wanted to open his mouth to give advice, but the situation was totally different.

Every piece of wood was safe, while his sons have broken their knees.

Again father held his head and sat down.

He is still thinking about any plan to give the unity lessons of his sons but still no success.

If you have any idea which you want to give to the woodcutter, type it in the comment.

You can also learn computer courses free on this website just visit this link
I have a YouTube Channel too where you can get the video training lectures about computer-related topics.
Published On June 5, 2020
By admin
Cagegories
Tags

One thought on “Unity is strength Modern Story”